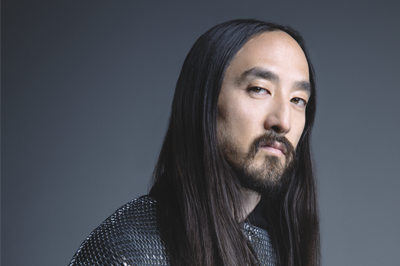 As the founder of the trendsetting record label, events/lifestyle company, and apparel line Dim Mak Records and Collection, which he created in 1996, Aoki has helped launch the careers of global acts like The Chainsmokers, Bloc Party, The Bloody Beetroots, The Gossip, and The Kills, among many others. Dim Mak Records today counts more than 1,000 official releases from the biggest acts and buzzing newcomers across EDM, indie rock, hip-hop, and beyond over its two-decades-plus discography. As a solo artist, Aoki boasts a lauded discography that includes: Wonderland (2012), his debut solo album, which garnered him his first-ever Grammy nomination for Best Dance/Electronica Album; the hip-hop centric Steve Aoki Presents Kolony (2017) and the Neon Future saga, which includes Neon Future I (2014, certified gold by the RIAA), Neon Future II (2015), Neon Future III (November 2018), and the highly anticipated Neon Future IV (Spring 2020); which has already rocketed in streaming to date and received praise from already released singles.

His genre-defying collaborations also include original songs with A-listers like Lil Yachty and Migos (“Night Call” from Kolony, 2017); One Direction’s Louis Tomlinson on the global hit “Just Hold On” (2016), which debuted at #1 in more than 40 countries and has since gone gold or platinum in 18 countries; rock legend Sting on “2 in a Million” and Latin superstar, Maluma with “Maldad”.

In 2016, Aoki released the Netflix Originals documentary film I’ll Sleep When I’m Dead, which earned him his second Grammy nomination for Best Music Film and globally released in more than 190 countries. Recognized by Forbes as one of the top 5 world’s highest-paid, Aoki is described as “perhaps the hardest-working name on the list ” (Forbes), counting more than 250 tour dates per year, with past performances at nearly every top festival around the world including Coachella, Ultra Music Festival, Lollapalooza, Fuji Rock Festival, Tomorrowland, Electric Daisy Carnival, and more.

As a fashion designer/entrepreneur, Aoki has collaborated with major fashion and lifestyle brands like Converse and A Bathing Ape and serves as a global ambassador for several international brands including ASICS and Diesel. In 2016, he also debuted his very own Dim Mak Collection streetwear line, which he later presented at New York Fashion Week in 2017. In 2012, Aoki founded THE AOKI FOUNDATION, which primarily supports organizations in the brain science and research areas and has donated more than $500,000 to date. Most recently, in September of 2019, Steve Aoki released his critically acclaimed memoir entitled BLUE: The Color of Noise published by St. Martin’s Press.