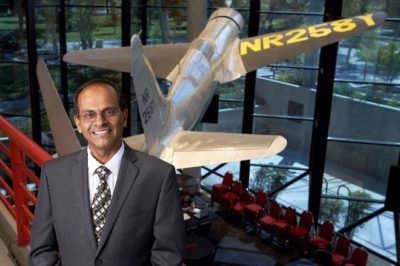 Rama Venkat is the Dean of the Howard R. Hughes College of Engineering and a Professor in the department of electrical and computer engineering. While serving in this capacity, he has been instrumental in growing the College including developing the College of Engineering Senior Design Competition, spearheading collaboration between various schools at UNLV, and creating partnerships with government agencies and the private sector to help bring university innovations to the public and enhance employment opportunities for students. His research areas of interest include solid state sensors, devices, physics, and modeling of devices and photonics.

Venkat first came to UNLV in 1989, becoming a full professor in 1998, and serving as Chair of the department of Electrical and Computer Engineering from 2000-2006. He became Dean of the College in 2010. During his tenure, he has authored or co-authored 43 referred journal publications, supervised and graduated nearly 30 graduate students, won a variety of teaching awards, and brought in more than $2,000,000 in research funds.